Many are well acquainted with the Lincoln quote while trying to hold the nation together with his “house divided” address in 1858. Years before being elected president,  Lincoln’s speech at the close of the Illinois Republican State Convention predicted,

“A house divided against itself cannot stand.”

I believe this government cannot endure, permanently half slave and half free.

The “house divided” analogy is taken from the words of Jesus after he was accused of being a Satanic demon because he was healing demon-possessed people. If a kingdom is divided against itself, that kingdom cannot stand. And if a house is divided against itself, that house will not be able to stand.  And if Satan has risen up against himself and is divided, he cannot stand, but is coming to an end. Mark 3:24–26

Many establishments from stores to restaurants have used the house divided motif. Maybe they support rival universities or football teams like the House Divided in Amarillo, TX over Texas Tech and Texas A&M Amarillo, Texas – House Divided Restaurant & Sports Grill (housedividedamarillo.com).  There are even house divided” flags available to purchase that contrast many different college teams. Where I live, Boise State and University of Idaho are the dividing rivals. During all the times I have heard the phrase used, I have never seen a physical building divided in half before I saw a picture of the Geteilte Kirche am Kreuzbichl.  This church dates back to the 1400 where it was likely only a Marterl (a wayside shrine on the road to encourage prayers for travelers against highwaymen and for safe travels. It is on a former Roman road that led to Salzburg. It became a chapel in 1588 and became known as the Kreuzbichlkapelle. Geteilte Kirche am Kreuzbichl – Wikipedia, the free encyclopedia

At first, only the section where the priest stood was constructed. It is assumed that the priest began to feel sorry for the pilgrims who came for services and commissioned an area in 1784 for the congregation to be sheltered on the other side of the street because there was not much space between the road and the slope. The chapel was built with the sanctuary about two meter above the road and the worshippers gathered beyond that. On the opposite side of the road, they built a two-story structure with chairs and benches open to the road where the worshippers can see the priest. Both buildings are secured by wrought-iron gates. Geteilte Kirche am Kreuzbichl (Divided Church) – Gmünd in Kärnten, Austria – Atlas Obscura

There is an inscription about the door that translates to “By his blood we have been justified”. The church is regularly renovated, and occasional services are still held there. The main road has been diverted around that area but there still is an agricultural road that divides the building and is still in use. The city of Gmund has committed to keep the church forever and preserve it. 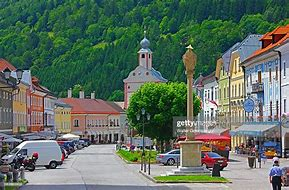