May Day is not an emphasized holiday in the states. As a kid, I remember making May Baskets of picked flowers from our yard and leaving them on neighbor’s doors. It was a chance to try out some craft ideas for the Girl Scouts or Sunday School but there were never large May Day displays in stores like for Easter or Valentine’s Day or any number of other holidays that have a more noticeable commercial element.

May Day has a larger presence in Europe. Celebrated with Maypoles, Witches Nights, and Labor Marches. Maypoles were first used in the 14th century in the British Isles and later appeared in German-speaking countries by the 16th century. The unique history of May Day in Germany (iamexpat.de) The Germans say, “Alles neu macht der Mai” (May makes everything new). Every year a new maypole is set up. The first Maibock beer is poured, the cherry blossoms and Maigloeckchen (flowers) are enjoyed, and lovers reveal their secret crushes. May Day and Maypoles in German-Speaking Europe | The German Way & More (german-way.com)

In German, a Maypole is a “Maytree” (der Maibaum). The tree is especially chose for the celebration.  In Bavarian, most communities have a club known as the Burschenverein. These are young men similar to a 4-H Club in the US or a Farmer’s Club in the UK. Each community that developed their own rules and traditions concerning the Maypole since the 19th century. For instance, your bachelors erect a large birch tree in front of their girlfriends homes in the Rhineland. In Bavaria, the maypole is erected in advance of May Day to hold competitions including chances to steal the maypole from other villages. If you fail to protect your maypole, you must invite the thieves over on May 1 for free beer and food. The unique history of May Day in Germany (iamexpat.de)

May is also known as the “Wonnemond”, the month of lovers since spring is the symbol for reawakening of fruitfulness. Young people dance around the maypole, weaving in and out as a flirtatious joining. May is when the largest number of weddings take place in Germany. May Day in Germany – German Culture

Another Bavarian tradition is the Maibaumkraxeln (Maypole climbing) contest. The men battle to climb a polished tree trunk the fastest. The tree may even be covered in soap so the climbers smear ashes, tree sap, or pitch on their hands to assist in some grip. The goal is to win Brxelm and Wuerste (pretzels and sausages) that hang at the top of the pole and to impress the girls. The trees are 46 feet high with no branches or bark and slick as a greased pig. May Day in Germany – German Culture 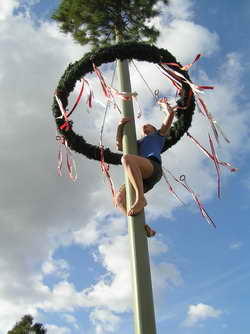 The flip side of all the merriment is the Saint Walpurgis Night. The night before May 1st, named after the 8th century abbess who battled disease and witchcraft, gave way to the title of Witches’ Night (Hexennacht).  People believed that witches held celebrations on the summit of Blocksberg in Saxony-Anhalt on the night between April 30 and May 1. It was dangerous to be outside so they lit fires and danced wildly to deter the witches from coming too close to their homes. This tradition led to the custom of lighting bon fires and erecting the maypoles. May Day in Germany (timeanddate.com)

Today, many May Day celebrations focus on the issues of the Laborer and are much like the Labor Day celebration in the US, but that study will have to wait for another blog.