If the cold winter months are dragging on, you may be one who likes to curl up with a good book by the fireplace to while away the hours before spring dawns again. Others of you may be outdoor enthusiasts and spend your days skiing or ice skating. Now that the Winter Olympics are in full swing, I sit at home and marvel at the skill and bravery of the men and women going for gold in their chosen sport.

I found it interesting that the two worlds of story and skiing are combined in a recounting of a Sir Arthur Conan Doyle adventure. Doyle, famous for his Sherlock Holmes detective stories, finally got bored of him and killed off the character in December 1893. His wife’s health compelled him to move the couple to the Swiss Alps which in fact improved her vitality. She eventually succumbed to tuberculosis in 1906 leaving Doyle with two children, Mary and Kingsley. (He later remarried and had three more children.)

Doyle was well established with the Strand magazine where his serialized accounts of Sherlock Holmes ran for years. Between 1891 and 1930, the Strand Magazine published no less than 121 short stories, 70 articles, nine novels, two interviews, and one poem by Doyle.The Strand Magazine – The Arthur Conan Doyle Encyclopedia (arthur-conan-doyle.com) 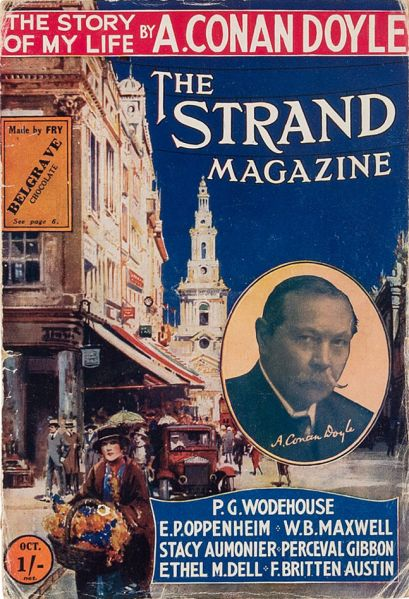 Basking in the beauty of the Swiss Alps, Doyle could not resist the call of the mountains. He hired a guide to teach him to ski and they set out to traverse from Davos to Arosa and go over Furker Pass in 1894. His adventure was not without peril. He took a number of spills and slid down a good share of the mountain on his backside where he insisted that “I was happiest when I was near the wall.”

He recounted the whole experience in an article for the Strand called “An Alpine Pass on Ski”, December 1894. It was reprinted in the Chicago Ledger in 1898 (below).

The fact is it is easier to climb an ordinary peak, or to make a journey over the higher passes, in winter than in summer, if the weather is only set fair. In summer, you have to climb down as well as to climb up, and the one is as tiring as the other. In winter your trouble is halved, as most of your descent is a mere slide. If the snow is tolerably firm, it is much easier to zigzag up it on ski than to clamber over boulders… Our project was to make our way from Davos to Arosa, over the Furka Pass, which is over nine thousand feet high.

An Alpine Pass on “Ski” – The Arthur Conan Doyle Encyclopedia. 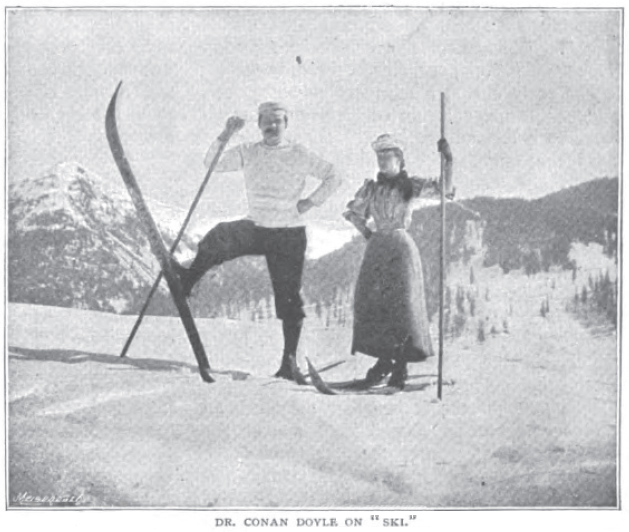 This introduced the sport of skiing to many British and American citizens who lived for from the Swiss Alps. “His story created an interest in skiing among the English middle class,” says Vincent Delay, curator of the Sherlock Holmes Museum in Lucens , Switzerland. “He played a big role in popularizing ski tourism in the Swiss Alps and surely the rest of the world.” Sir Arthur Conan Doyle – Ski Pioneer and World Famous Novelist.

A bronze plaque remains in Davos to commemorate his ski adventure. 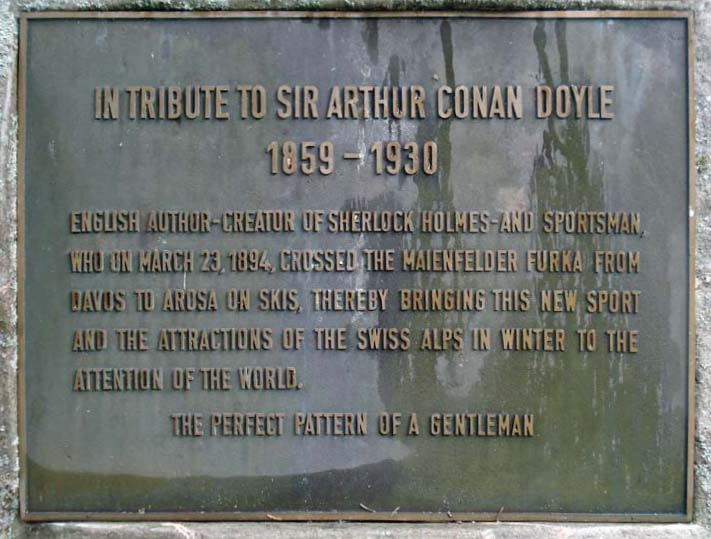 Whether you are a reader, a skier, or both, it may be nice to know that without Sir Arthur Conan Doyle, skiing may not have taken off as a popular sport nearly as early as it did. And all those Olympic skiers we are watching on TV going for the gold may not have been introduced to the sport around the world. Stay warm and safe as we wait for spring.