Tis the season for county and state fairs across the country. An attraction most commonly found at each accompanying amusement park is the imposing Ferris Wheel. Sitting on the highest arc reveals vistas unimagined on the ground. Slow enough for grandma to ride yet breathtaking enough for the younger set, especially if they want to escape the view of prying eyes below for a moment.

The idea for the “pleasure wheel” has been around for centuries. Peter Mundy, an early English explorer, found one being used in Bulgaria in 1620 .BBC News | UK | Eyes in the sky (archive.org). Five years before, in 1615, Pietro Delle Valle, a Roman traveler sent letters from Constantinople about a festival there. He described riding on the Great Wheel.

I was delighted to find myself swept upwards and downwards at such speed. But the wheel turned round so rapidly that a Greek who was sitting near me couldn’t bear it any longer and shouted out “soni! soni!” (enough! enough!).

Pietro’s Pilgrimage: A Journey to India and Back at the Beginning of the … – Wilfrid Blunt – Google Books

The popularity of these wheels spread so much that there were several in the United States in the late 1800s. By 1892, William Somers installed three 50-foot wooden wheels at Asbury Park, NJ, Atlantic City, NJ, and Coney Island, NY. He was granted a US patent for his “Roundabout”. A Civil War engineer by the name of G.W.G. Ferris apparently rode one of these “Roundabouts” and patterned his Chicago Ferris Wheel after them for the 1893 World’s Fair.

Although Somer’s sued Ferris for the design, Ferris won since his structure used different technology for the use of a steel wheel rather than a wood one. Ferris’ 264-foot attraction was to rival the Eiffel Tower centerpiece of the 1889 Paris Exposition. As a graduate of Rensselaer Polytechnic Inst. and a Pittsburgh bridge-builder whose career included the railroad industry, Ferris’ firm tested and inspected metals for such construction.

Ferris’ Wheel carried 36 cars, each with 40 chairs able to seat 60 people. A total of 2,160 capacity was available on the ride and some 38,000 passengers rode it daily. It took 20 minutes to complete two revolutions. Tickets were 50 cents. 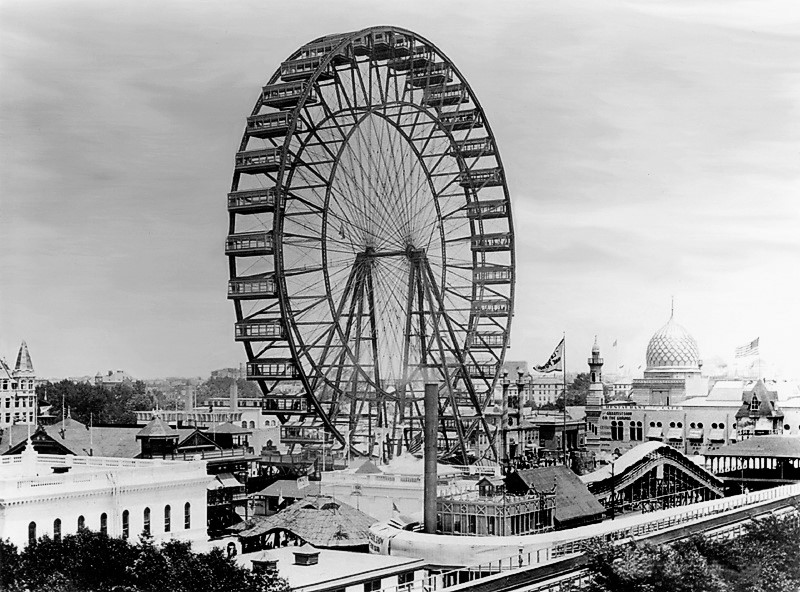 The wheel closed in April 1894 and moved to Lincoln Park for a time. A local resident filed a suit against it, but it remained until 1903 where is traveled to St. Louis for the 1904 World’s Fair. Eventually it was demolished in 1906. Ferris wheel – Wikipedia

Americans are not the only ones who have had a long-term love of these giant wheels. The Vienna’s Grand Ferris Wheel, The Wiener Risesenrad in Prater Park is the oldest standing Ferris Wheel in Europe. It was the largest in the world until 1985 and has been the backdrop for several movies. Prater Park itself dates back to Emperor Joseph II’s “Golden Jubilee”. He gave his hunting ground over to the public to become an amusement park in 1766.  The Wurstelprater is one of the oldest amusement parks in Europe, The Riesenrad, the Ferris wheel, was built in 1897 and engineered by a British Royal Navy Lieutenant Basset.  Vienna Grand Ferris Wheel – Vienna, Austria – Atlas Obscura

The Riesenrad burnt down in 1944 but was rebuilt the following year with 15 passenger cars and was the tallest of its kind for 97 years. It is still a popular tourist attraction today and you may watch for it in movies and novels. It can be seen in Letter from an Unknown Woman (1948), The Third Man (1949), The Living Daylights (1978 Bond film), and, Before Sunrise (1995). Ferris wheel – Wikipedia

So if you spend some time at the fair this year and you find yourself flying high in the sky, remember you are in centuries of good company.