Today most of us think of brands like Birkenstock, Adidas, or Puma when thinking of shoes from Germany. When we were expecting our first German exchange student, she asked us if she could bring anything to us from Germany and we suggested Birkenstocks. Bless her heart, she gathered all our shoe sizes and she brought each of us a pair. German fairy tales about elves and shoemakers could not have provided better gifts for our feet.

Casual wear is not the German only claim to fame for shoe fashion, however. Look at these beauties from 1890s Belgium. Not a fan of high heels, these would never grace my feet and they look like they would fit nicely in any French cabaret. Can you believe that before the mid 1800s, shoemakers did not make separate shoes for the right and left feet?  The technology advanced to be able to make shoes to go with different outfits and performance. 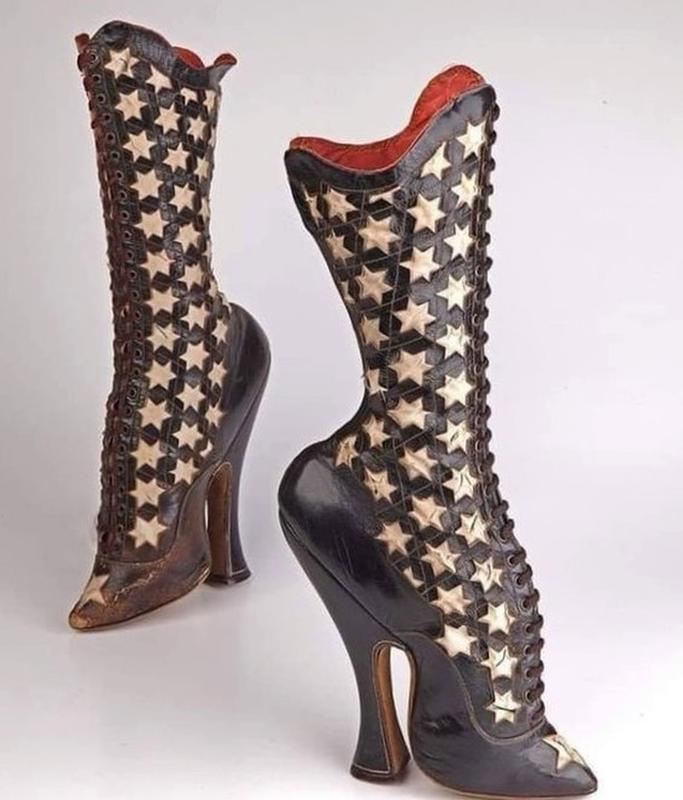 The Birkenstock predates the high fashion you see here. Johann Adam Birkenstock founded the brand in 1774 in Neustadt, Rhineland-Palatinate, Germany. The cork bed contoured to the foot compared to the flat soles of most shoes at that time. Eventually the footbed was created and could be sold separately and by 1925 Birkenstocks were sold all over Europe. After WWII, the Birkenstocks became popular among returning soldiers because of the orthopedic support but were not in the American market. By 1966, Birkenstocks were brought to America and at first, were only sold in health stores. By the 1970s the brand became associated with the hippie movement because of their “back to nature” philosophy. In 1973, their most popular sandal, the Arizona, was introduced in the state. Birkenstock – Wikipedia

When we took Steffi, our exchange student to the store to show her what was available to us in the US, she was amazed by two things. First, Birkenstocks cost considerably more in the states and second, we seem to be so limited in color and style compared to her homeland. When she asked us what colors we wanted, we did not realize we had so many options until we visited her in Germany and saw the vast selection.

These famous brands resulted as a falling out between two Dassler brothers. They created the three striped shoes that athletes wore at the 1936 Olympic games and their business began to thrive. When WWII broke out, Rudolf was drafted and Adolf was left to run the business. This created hurt feelings that one was risking his life while the other was living in luxury. It did not help that the wives did not get along either and insults were exchanged. They split ways. Rudolfo created Puma and Adolf named his brand after himself, combining parts of his first and last name. In fact when they died, they were buried at opposite ends of town. Adidas vs. Puma: A History of Two Brothers – Explosion (ghsexplosion.com)

Both the Puma and Adidas factories are in their hometown of Herzogenaurach, Germany. For some time, the workers from the two plants did not associate but it is less contentious these days. Their rivalry is likely the reason both brands became so popular since they were always trying to outdo the other.

I don’t know if this is the time of year you go shoe shopping for summer sandals or athletic wear, but I am sure that these German brands are readily available wherever you shop.