Naming a child is often a dilemma for new parents. Do you name them after ancestors or favorite relatives? Do you follow a trendy phase and name them for popular characters or after fruit? Names follow cycles. I know many women of a particular age named Linda or Diane. There are not many girls in school now with those names.

November 10 is the birthdate of the famous Protestant reformer, Martin Luther. The day after his birth, he was taken to church and given the name Martin because it was St. Martin’s Day. Not knowing much about any saints, I decided to uncover more about this St. Martin. Who was he and why is he a saint?

St. Martin was born in 316 in present-day Hungary. His father was a tribune in the Roman army under Emperor Constantine. He grew up in Italy and followed in his father’s footsteps and became a soldier when he was 15. He converted to Christianity during his military time and one of the most circulated stories (and images) of Martin is when he tore his cloak and handed half of it to a naked freezing man.

His conscience began to prick him about the conflict of being a soldier under the antichristian Julian and his devotion to Christ. Before the battle at Borbetomagus (now Worms, Germany), he determined that he must switch his allegiance to Christ rather than Rome and planned to refuse Julian’s pay and retire instead of fighting He said, “I am the soldier for Christ; it is not lawful for me to fight.”.

( SULPITIUS SEVERUS ON THE LIFE OF ST. MARTIN. Translation and Notes by Alexander Roberts. From: A Select Library of Nicene and Post-Nicene Fathers of the Christian Church, Second Series, Volume 11. New York, 1894. [1]Archived 2006-09-09 at the Wayback Machine accessed 15th January 2015.)

Martin was charged with cowardice and jailed. He volunteered to go unarmed to the front of the troops to fight in response to the charges. His superiors agreed but before that happened, the invaders sued for peace and the battle never took place. He was released from military service.

Kurlansky, Mark (2006). Nonviolence: Twenty-five Lessons from the History of a Dangerous Idea. pp 26–27.

Martin continued evangelizing most of his family and miracles were attributed to his many good deeds. He eventually became the third  Bishop of Tours under protest. One story account said he hid from those who wanted him to be bishop until they found him and insisted he take the position. He did not feel worthy of the honor.

In the middle ages, pilgrimages to his crypt were popular. He is considered the patron saint for alcoholics, soldiers, and many other populations.  Whether Martin Luther’s family were ardent fans of St. Martin’ legacy is unclear. I was unable to ascertain whether St. Martin’s Day was widely celebrated in the 15th century but many accounts record the naming of Martin in the saints honor.

Other German connections to St. Martin are held in the town of Kaiserslautern, Germany. The heart of downtown is St. Martin’s Square and St. Martin’s Church. It was built as a Franciscan monastery in the 14th century. In 1519, Franz von Sickingen became protestant and his Nanstein Castle became a stronghold for local nobles favoring the Reformation around Kaiserslautern. Nanstein was besieged by cannon-armed German Catholic princes and Sickingen died after the castle surrendered. So the protestant nobility were subdued by the Catholic princes.

Saint Martin’s Day, also known as the Feast of Saint Martin, Martinstag or Martinmas, as well as Old Halloween and Old Hallowmas Eve, is the feast day of Saint Martin of Tours (Martin le Miséricordieux) and is celebrated on November 11 each year. This is the time when autumn wheat seeding was completed, and the annual slaughter of fattened cattle produced “Martinmas beef”.

Beginning in 490,  fasting three days a week from the day after Saint Martin’s Day (11 November) reigned. In the 6th century, local councils required fasting on all days except Saturdays and Sundays from Saint Martin’s Day to Epiphany on January 6, a period of 56 days, but of 40 days fasting, like the fast of Lent. It was therefore called Quadragesima Sancti Martini (Saint Martin’s Lent). This period of fasting was later shortened and called “Advent” by the Church.

A widespread custom in Germany is bonfires on St. Martin’s eve, called “Martinsfeuer.” At one time, the Rhine River valley would be lined with fires on the eve of Martinmas. In the Rhineland region, Martin’s day is celebrated traditionally with a get-together during which a roasted suckling pig is shared with the neighbors. 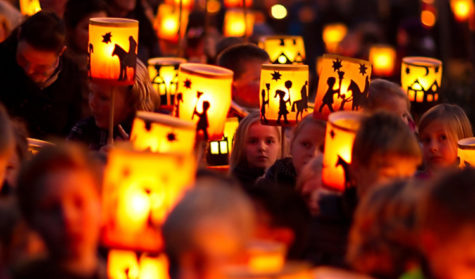 The nights before and on the night of Nov. 11, children walk in processions carrying self-made lanterns and sing Martin songs. Often the walk starts at a church and goes to a public square. A man on horseback dressed like St. Martin accompanies the children. When they reach the square, Martin’s bonfire is lit and Martin’s pretzels are distributed.

In some regions of Germany, in a separate procession the children also go from house to house with their lanterns, sing songs and get candy in return. So you can see why the Old Halloween connection here.

The lanterns formerly symbolized the light that holiness brings to the darkness, just as St. Martin brought hope to the poor through his good deeds. Even though the tradition of the large, crackling fire is gradually being lost, the procession of lanterns is still practiced. 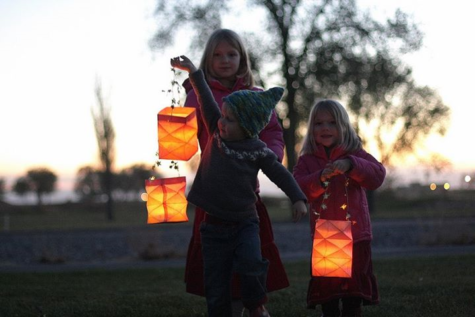 In some regions of Germany, the traditional sweet of Martinmas is “Martinshörnchen”, a pastry shaped in the form of a croissant, which recalls both the hooves of St. Martin’s horse and, by being the half of a pretzel, the parting of his mantle. In parts of western Germany these pastries are instead shaped like men (Stutenkerl or Weckmänner).Feast of Saint Martin | Pagan Calendar (shirleytwofeathers.com)

In some areas, traditionally children receive presents from St. Martin on November 11, instead of from St. Nicholas Day on December 6 or Santa Claus Day on December 25. They also have lantern processions, for which children make lanterns out of beets. I am not sure how that works. In recent years, the lantern processions have become widespread as a popular ritual, even in protestant areas of Germany and the Netherlands who do not typically recognize saints. I suppose this is beneficial information heading into the holidays.

7 thoughts on “The Namesake: Martín”